A guaranteed interview is awaiting anyone who signs up to a new three-day electrical course at Harrogate College.

The college is teaming up with local power supply firm APS to host the 18th Edition – Requirements for Electrical Installations BS 7671:2018 course in March.

The [re]boot course, which is free to applicants who meet certain eligibility criteria, will focus on how to interpret and comply with the 18th Edition of the IET Wiring Regulations.

Everyone who completes the short programme will be offered an interview with APS.

A great chance to get a foothold in a booming sector

Deputy Head of Department at Harrogate College, Les Potter, said: “This course is a great chance for anyone with experience of working in the electrical field to keep their skills up to date.

“It’s also a brilliant opportunity, for everyone who completes the course, to secure a guaranteed interview with APS.

“We are delighted to be partnering with the company on this and look forward to welcoming the participants.”

The course runs from Monday 7 to Wednesday 9 March, with the end-of-studies exam taking place at 1pm on the final day.

It is suitable for anyone with electrical installation experience, and can be accessed for free* if the candidates are:

For more details or to book a place send an email to @alison.kwan@my.leedscitycollege.ac.uk.

Sustainability is on the menu

Students from Harrogate College are using their culinary and creative skills to come up with a new, sustainable menu for RHS Garden Harlow Carr.

Hospitality students have been asked to devise a hypothetical fresh bill of fare and concept for a new café that is being created by converting the former Harrogate Arms pub.

Harlow Carr, which owns the Grade II Listed property, grows plenty of fresh produce which will feature prominently in the new establishment’s dishes.

The Harrogate College group, who are being led by seven Level 2 Professional Cookery students, recently visited the site to be briefed on their task. They also enjoyed a tour of the grounds, plus a chance to try their hand at potting.

An exciting collaboration that reflects our values

The initiative represents the start of a closer partnership between the college and Harlow Carr, who worked collaboratively to find the right project.

Harrogate College’s Cultural, Contemporary and Heritage Studies Programme Manager, Jason Parry, said: “This is an exciting project that has a focus on sustainability and working with the produce grown on the site.

“It ticks so many boxes for us in terms of the college’s values and aspirations – sustainability, ‘food to fork’, carbon reduction and seasonality – along with menu and service design, work experience and responding to a client brief.” 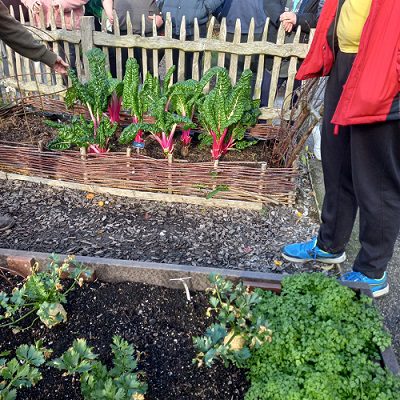 He added: “The project will be followed up throughout the year with Harlow Carr, who will do a progress check with the students in January.

“Ultimately it will end up with the students giving a ‘Dragon’s Den’ style pitch to Harlow Carr staff, with small groups presenting their ideas around the menu, and the service, and showing how they have worked to meet the client’s brief.”

Harrogate College, as part of its wider drive to become a centre of green excellence, recently launched a Sustainability Pledge which sets out its commitment to becoming net zero carbon by 2030.

For more details on hospitality courses at the college click here

This website uses cookies to improve your experience while you navigate through the website. Out of these cookies, the cookies that are categorized as necessary are stored on your browser as they are essential for the working of basic functionalities of the website. We also use third-party cookies that help us analyze and understand how you use this website. These cookies will be stored in your browser only with your consent. You also have the option to opt-out of these cookies. But opting out of some of these cookies may have an effect on your browsing experience.
Necessary Always Enabled
Necessary cookies are absolutely essential for the website to function properly. This category only includes cookies that ensures basic functionalities and security features of the website. These cookies do not store any personal information.
Non-necessary
Any cookies that may not be particularly necessary for the website to function and is used specifically to collect user personal data via analytics, ads, other embedded contents are termed as non-necessary cookies. It is mandatory to procure user consent prior to running these cookies on your website.
SAVE & ACCEPT